Come together for photo, social distance for safety — Leno Bahamas team comes together for a brief Kodak moment to celebrate 10 years of building a financial services business from the ground up. Leno started in July 2010 with Bahamian accountant Sean K. Longley’s vision to provide personal and corporate financial solutions to an underserved market. Today the company manages more than $800 million in assets for local and international clients, includes a real estate division, rivals the largest securities brokers and is a leader in the digital assets space. 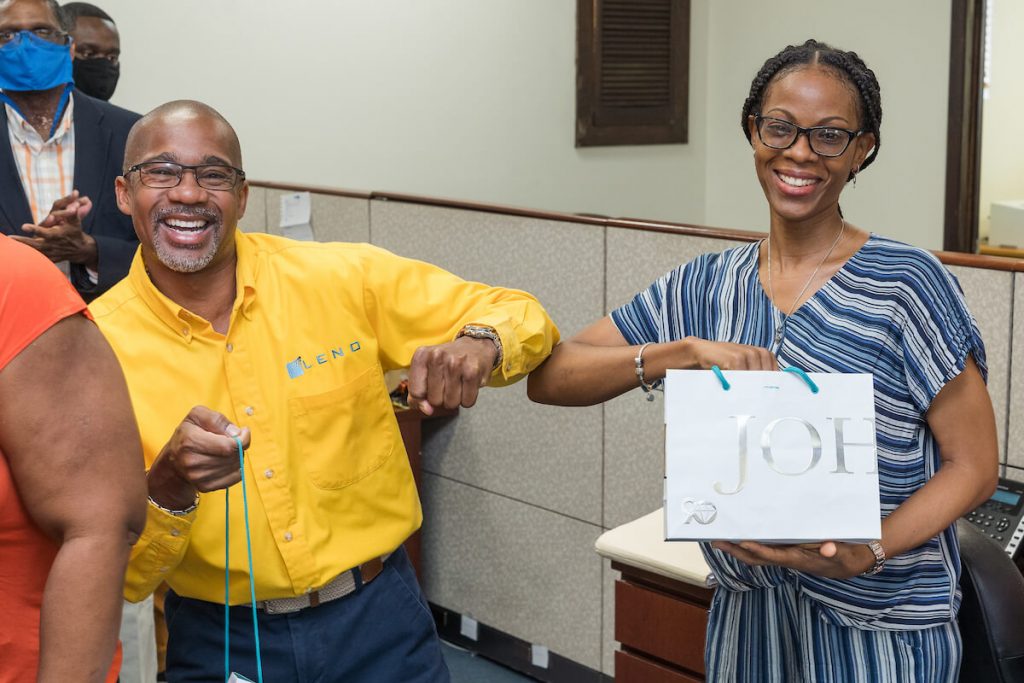 Leno founder and CEO Sean K. Longley is pictured with Antneal Pinder, accountant, one of the original four team members who opened the doors to Leno in July 2010. The elbow bump and gift giving at the 10th anniversary office party was in keeping with COVID-19 measures with masks removed momentarily for photo or remarks.

Six months ago, Leno founder and President Sean K. Longley planned to throw a big bash to celebrate the company’s 10th anniversary. Instead, he delivered stirring remarks to staff members during an in-house social distancing party, praised a team he said was unmatched and vowed to use the company’s success to help build a resilient Bahamas through education, culture, sports and environmental causes.

With the original four staff members still an integral part of the company, Leno’s team now numbers closer to 40 and its role has expanded to include financial and estate planning, trusts and foundations, real estate, payroll, accounting, VAT filing and a host of corporate services, securities brokerage and soon to come, digital asset management. Leno has more than 1,000 accounts. Assets under administration or management exceed $800 million. 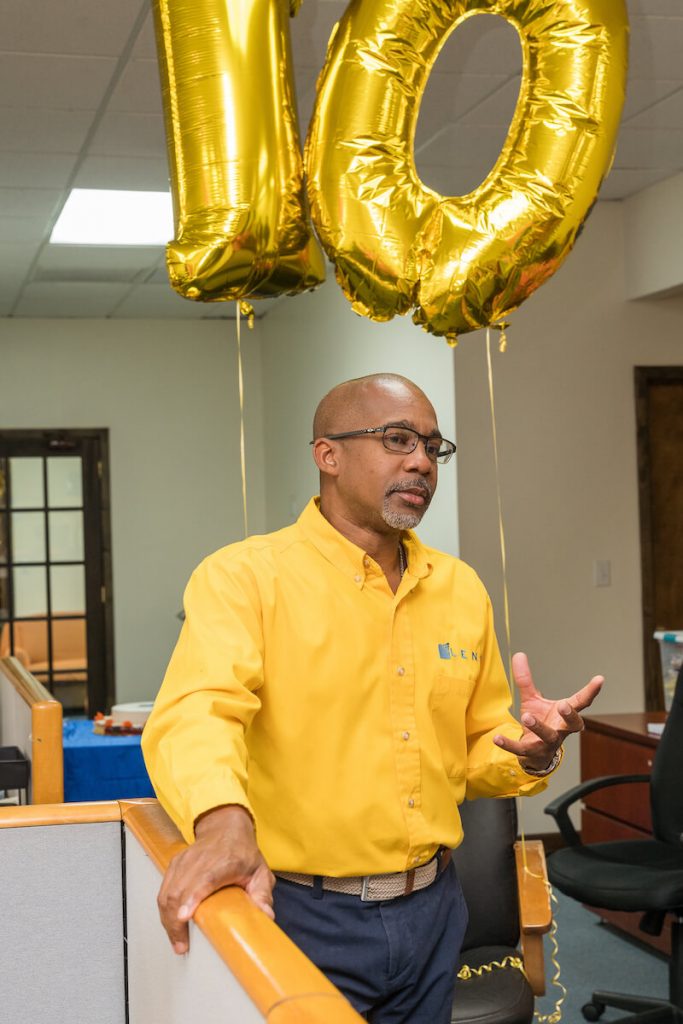 “I think we have achieved so much as a black-owned financial services company in The Bahamas. There aren’t any companies around that are like us,” said Longley, who spent more than 20 years in local and offshore financial services before striking out on his own.

In February, Leno broke ground on its new office complex, a 5-storey building atop Collins Avenue hill where it will occupy the top floor. A little more than a month after the official groundbreaking with Prime Minister Hubert Minnis helping to turn the first shovel of earth, COVID-19 struck and the country went into lockdown.

That’s when Longley began to re-evaluate the most important way to help. Leno was already sponsoring a basketball league that provided uniforms and gear for hundreds every year and its support and mentoring of Colours Junkanoo group allowed them to do what no other group has done – buy property, erect a warehouse and offer community services, including after school programs, making it a small business as well as community cornerstone. They were strong supporters of the Bahamas Financial Services Board on which Longley served as a director for six years and Leno Vice President of Wealth Solutions Brian Jones now serves as a director.

But nothing, the Leno team realized, was more important in the age of home schooling and the uncertainty of the future educational structure than putting a computer or tablet in every student’s hands. The company is forming a committee to work with national efforts, both public and private, to achieve that goal and Longley has vowed to help lead a national campaign to ensure every child has access to internet.

That sentiment hit home with one of the founding staff members, accountant Antneal Pinder.

“It is not where you come from that counts. It is where you want to go that matters,” she said, “The next phase of Leno’s journey is incredibly exciting. The infrastructure is in place. It will be all of us who have the confidence, the drive, the energy and most definitely the professional capabilities to lead that transformation.”

If the office party lacked live music and the accoutrements of a 10th anniversary bash, it more than made up for it in emphasis on togetherness, at times feeling more like a family reunion – minus the fights – than a financial services celebratory milestone.

And that sentiment was echoed by Manager of Business Development and Client Relations Khalil Braithwaite, who quoted an African proverb: “If you want to go somewhere fast go by yourself. If you want to go far, go together.”

Every party in a pandemic opens with a prayer, this one given by Mrs. Treval Sawyer as part of Leno team (pictured), prepares to celebrate a subdued 10th anniversary with the company pledging to give back, primarily to education, rather than spending on a big bash during challenging times.